Old Pics from the Philippines - Part 3

Sweetie is a Seventh Day Adventist; while in her hometown, we met with the local SDA pastor and his assistant.  (Yes, it's been so long I forget their names!  Forgive me Lord!)

On Sabbath we went to worship service at the SDA church.  You can't tell from these photos, but the wooden beams were so thoroughly chewed by termites that I believe that it was only the termites themselves who held the whole structure together!


We spent a lot of time hanging around Sweetie's parent's house.


The woman in the blue dress gave birth two days after this pic was taken.

I included this pic to show the contrast between shade and sunlight.  The tropical sun is very, very strong!


One of the things I never understood was why everyone planted coconut trees next to their home, often right in front of the door!  If one of the coconuts should fall and bonk someone on the head ...... OUCH!!  I was assured this never, ever happens, but I still watched my step around those coconut trees!  (Much to everyone else's amusement, I must add.)

Notice in this pic of a path to the house that there is a coconut tree RIGHT NEXT TO THE PATH!

In Sweetie's home town we would take "showers" outside with water piped in from ........ uh, I haven't a clue where this water came from.  (I probably don't want to know!)  Everyone but me also drank the stuff, but I just knew that if I took a sip of that water I'd be crouching in the CR for days!

Anyway, this water was FREEZING!!  We would bathe in the morning, when it was still cool outside, and running that cold water over your body wasn't refreshing, it was torture.  Okay ..... no one else minded it but me, but at least my howls of protest when the ice water froze me amused the kids.

Sad to say, we lost Lolo early in 2015.  But let me tell you; he was a good, hard working man, and very, very proud of his roosters! 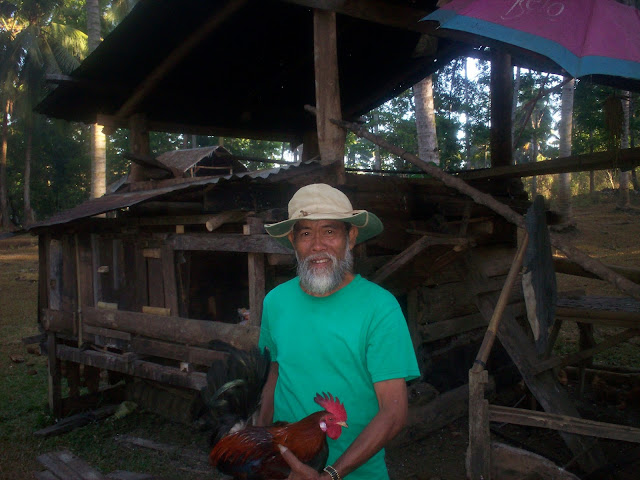 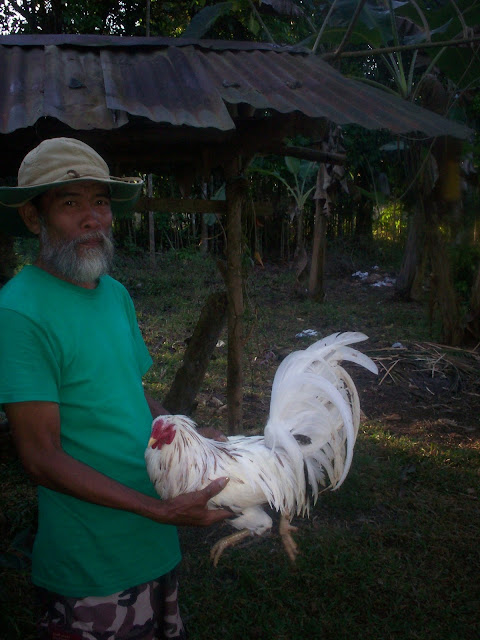 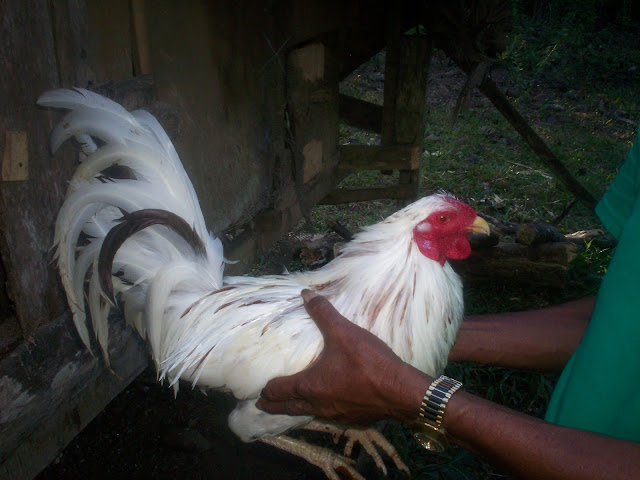 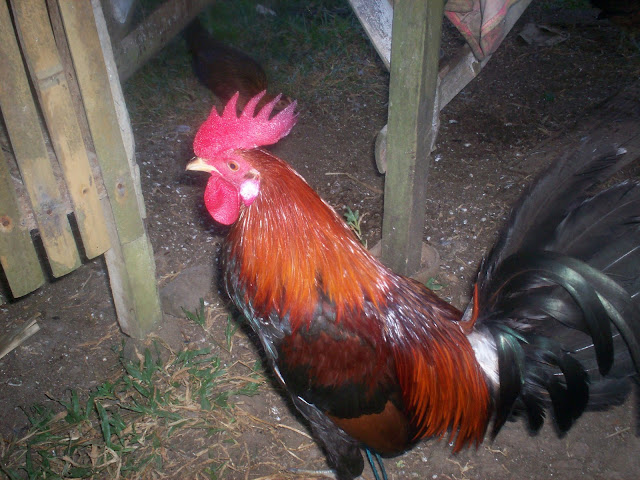 His chickens ruled the house, so to speak, and were running about all over the place! 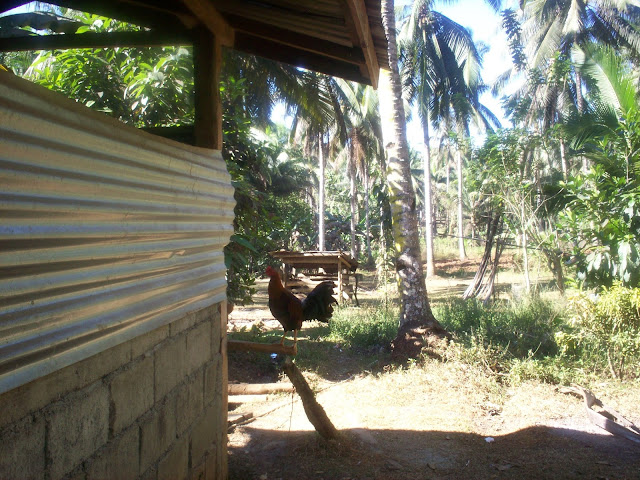 Chicken poop stinks.  Now imagine lots of chickens running around pooping in the hot, humid climate there, and you can probably begin to imagine how it smelled.

Those of you who grew up on a farm are probably used to the smell, and wonder what all the fuss is about, but to this city boy it was gross!


Eventually Grump got tired of trying to sleep in the heat, and insisted that he, Sweetie, and Kuya go to a hotel in the city.

It was really, really wonderful to spend a few nights sleeping in air-conditioning!

Our Philippine visit ended all too soon, and before we realized it years had rushed by, and then Lolo was gone.

It's difficult and costly to travel to the other side of the world, but we are hoping to go back soon!

Old Pics from the Philippines - Part 2

We stayed in the bedroom on the second floor of Sweetie's parent's house.  To say it was hot up there when we went to bed is an understatement, (there was no air-conditioning, and sometimes the fan didn't work because of brown outs - the electricity was being shut off due to a "drought"), but by morning if you weren't under at least a light quilt you would be chilly.  The air temperature where we were, (Zamboanga del Sur, Mindanao), wasn't actually that bad, it's just that during the day the angry tropical sun cooked anything it could see.

To make the Kano "comfortable" we had bought a small mattress, and some mosquito netting.  (Old Grump is EXTREMELY paranoid about being bitten by mosquitoes!)  But until about midnight, when it began to cool down a bit and the roof and flooring of the house had given up the heat they'd absorbed from the sun, sleeping up there was like trying to take a nap in a sauna.


One of our goals for this visit was to remodel the house, adding a downstairs bedroom for Lolo and Lola, and replacing the odious "CR", (comfort room), with an attached outhouse.

Here, for your viewing pleasure, is the infamous CR itself.  Old Grump absolutely HATED this room!  Imagine having to "do your business" in the tropical heat in a tiny little outhouse where your head bangs against the roof, and the walls are built out of scrap pieces of wood and discarded burlap bags, (yes - BURLAP BAGS!), with gaping holes scattered about here and there that were so large you could wave and say "Howdy!" to your neighbors as you sat on the toilet.  Ugh!


Of course, when Grump prattles on like this Sweetie just rolls her eyes.  No one else in the village, (and that would include young girls, who are renowned for their fussiness), had the least bit of problem or complaint with this CR, which was actually a fairly nice one, as at least its walls were straight.

Regardless of whether the CR was acceptable or not, we had decided to replace it with an attached CR so Lolo and Lola wouldn't have to go out in the rain when they "needed to go".  This would be part of the remodeling, and like I said earlier, but attached to the new downstairs bedroom.


You may notice that ALL the work to the house, including digging the pit for the new CR, was done by hand.  Digging a ditch in the tropical heat is tiring, to say the least!


The additions to the house were built with something called "hollow block", (termite proof!), which I assume is equivalent to what we call cinder blocks. 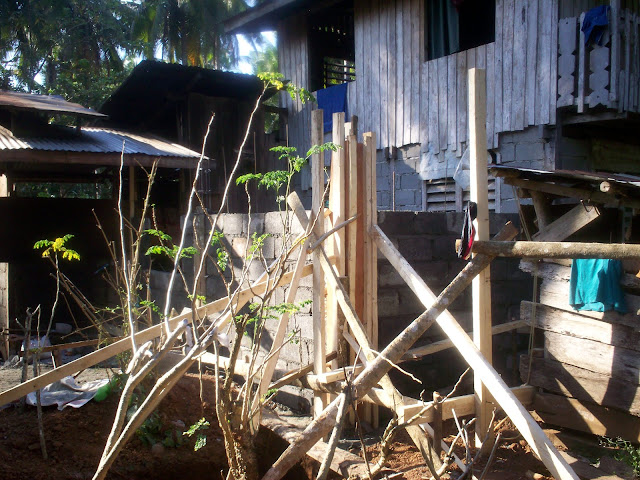 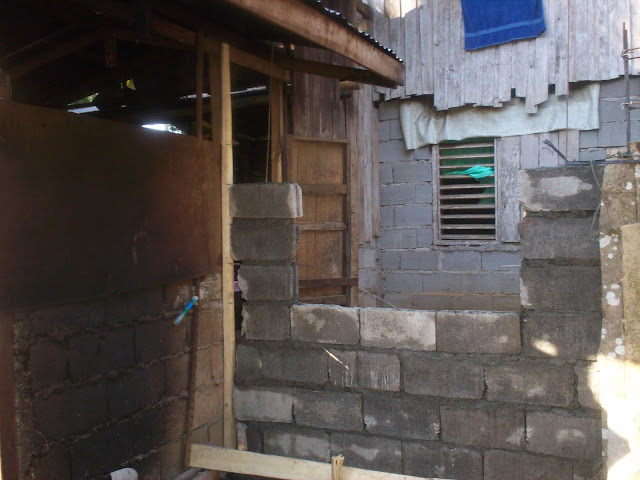 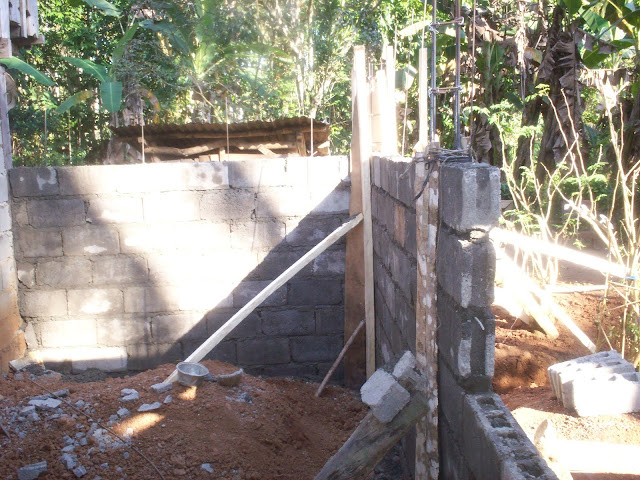 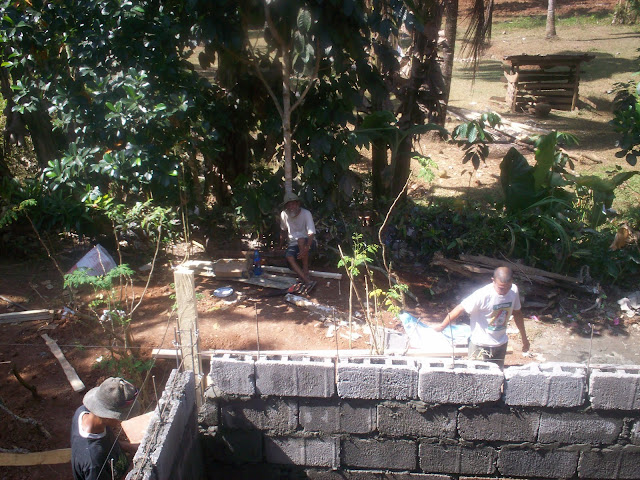 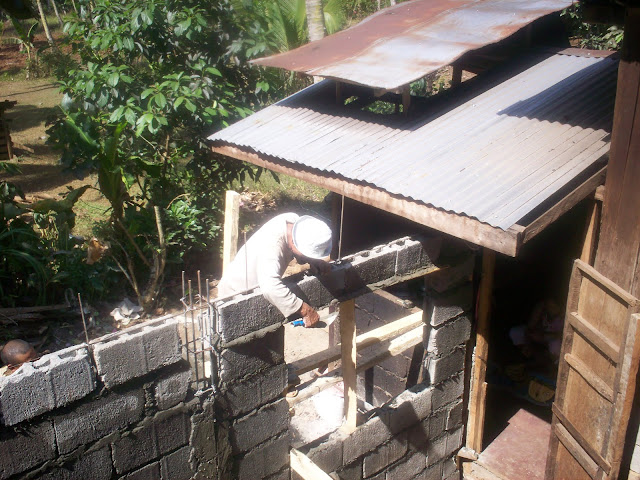 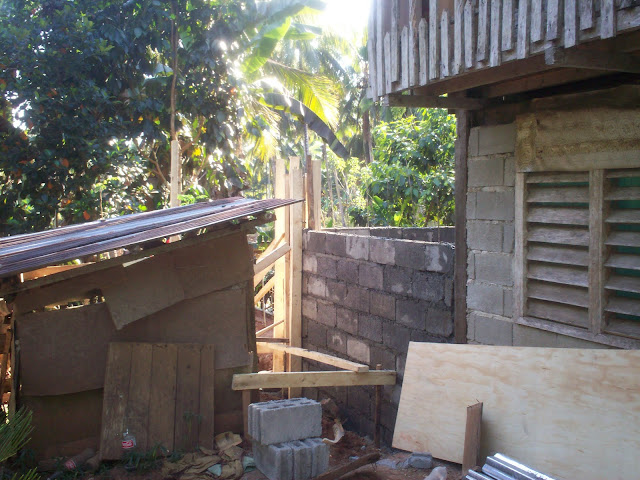 Like I said earlier, all the work was done by hand. 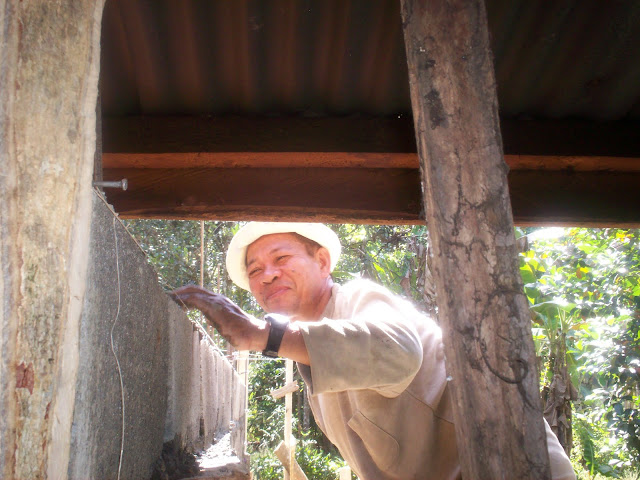 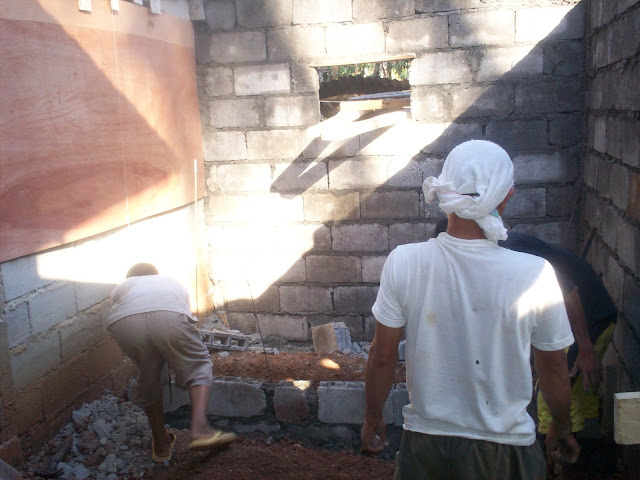 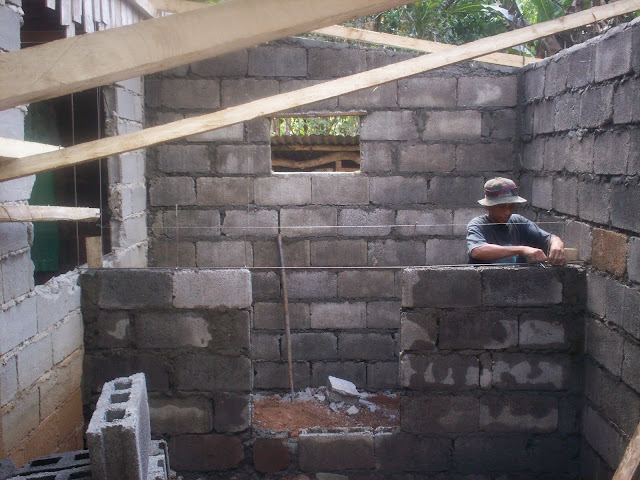 Eventually the new bedroom and CR were complete.  We had hoped to put nice wooden shutters on the bedroom windows, and do some work on the kitchen, (at a minimum replacing the leaky roof), but by then we had run out of remodeling money, so the work had to stop.

Old Pics from the Philippines - Part 1

Back in early 2010 we, (Grump, Sweetie, and Kuya  -  Dodong wasn't created yet!), made a trip back home to the Philippines to introduce a very young Kuya, (one year old), to the rest of his family.


Once we arrived in Mindanao, the first thing we did was get something to eat, along with our "greeting committee".  It seems everyone wanted to see the "Kano"! 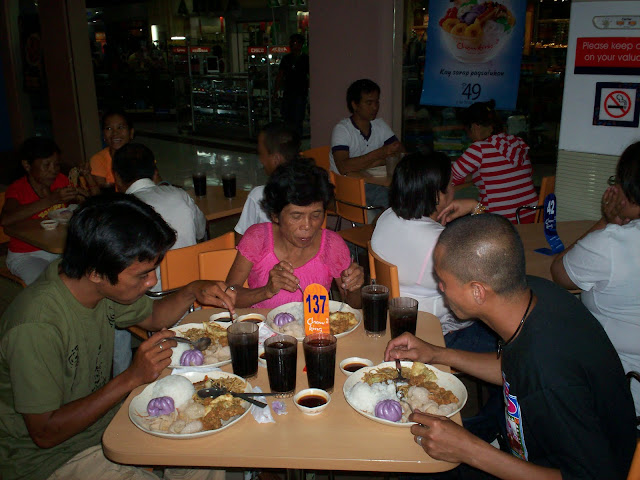 All the relatives and neighbors came over to help out in the kitchen. 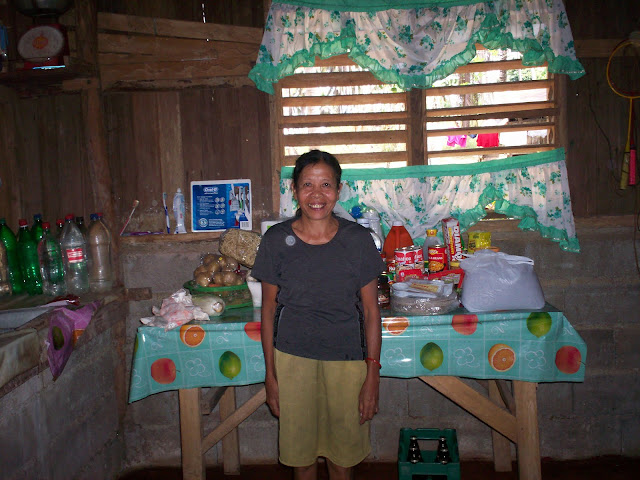 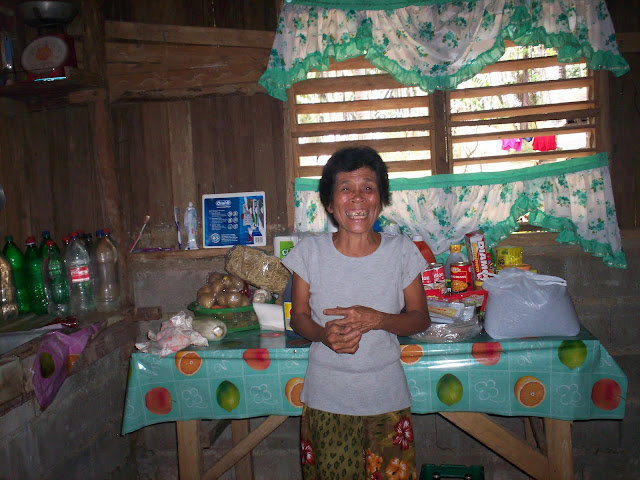 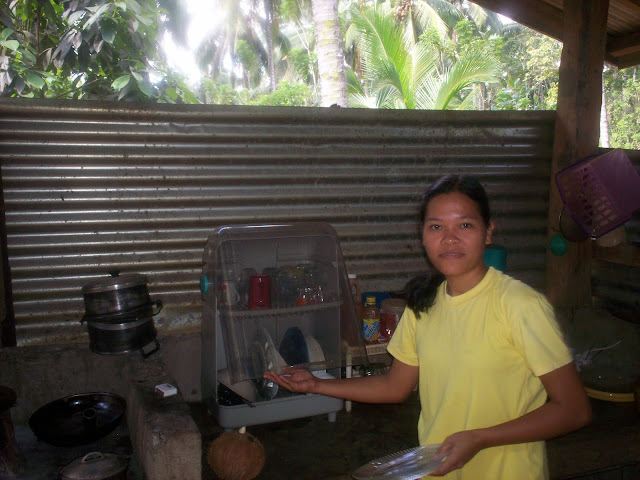 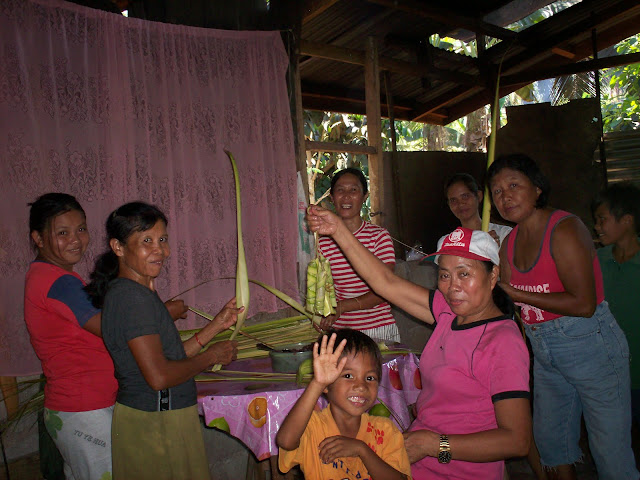 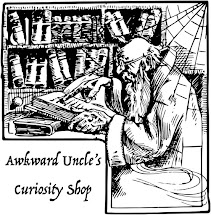